Notes Along the Path: July 2022 Edition

The Wall Street Journal summarized the year's first six months with a simple but telling headline: "S&P 500 Posts Worst First Half of Year Since 1970." Morningstar said the Dow's performance was the worst since 1962. 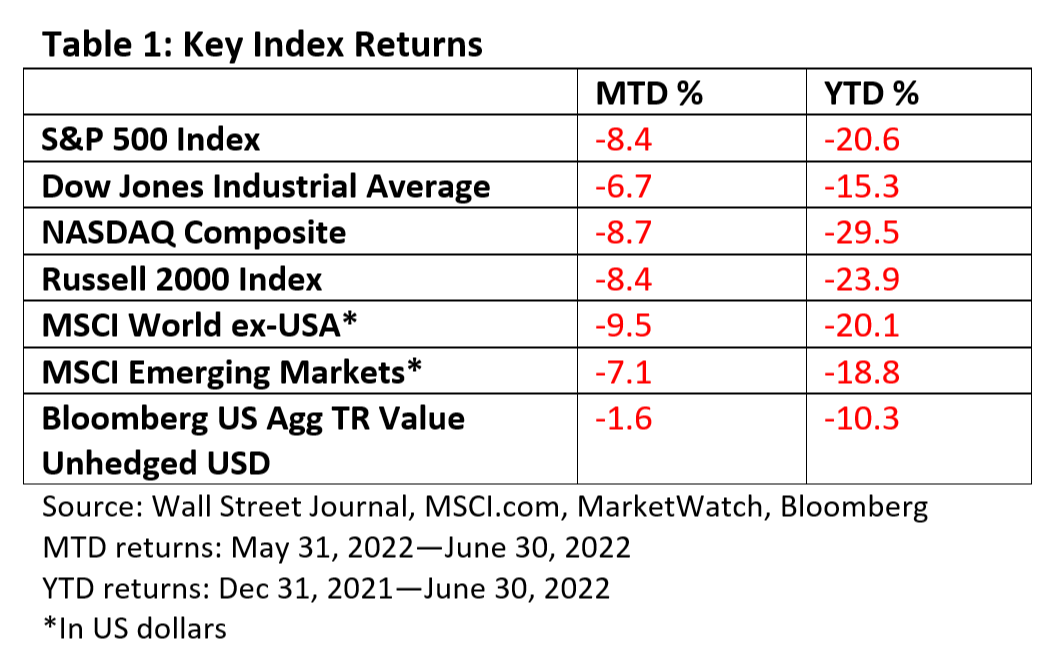 In reality, it's a timing issue since the index hit a peak in the first week of 2022 (St. Louis Federal Reserve data for the S&P 500).

Timing issues aside, stocks have tumbled since hitting all-time highs, and the S&P 500 Index lost 23.6% from its January 3 peak to its June 16 trough, which officially lands us in a bear market.

The stock market is considered to be in a bear market when the broad-based index falls 20% from a prior peak.

Since 1957, there have been 13 periods when the S&P 500 has lost 20% or more over six months, according to CNBC. That averages out to about one such decline every five years. In other words, it's not that unusual.

Today's market weakness shares little in common with conditions during 2007-2008, when a housing bubble fueled by weak lending standards and massive speculation nearly brought down the financial system.

While housing prices have soared and bubble talk abounds, bank capital standards are much stronger today, and lending standards have tightened considerably since the housing bust. Moreover, the problem isn't too many homes. It's just the opposite: too few homes in too many locales.

The last 13 years of capital market returns have been disproportionately impacted by unprecedented intervention in markets by the Federal Reserve, whose primary goal has been repressing interest rates to help normalize growth and inflation by incentivizing risk-taking in long-duration assets. The central bank's overpowering role has caused the interest rate sensitivity of all financial assets to soar. As rates have been in a consistent pattern of decline for most of the period—extending the bull market in bonds that began in 1982—both fixed income instruments and equities have benefited in tandem. Such a "correlation of one" was barely noted on the way up, but in hindsight, we can say it should have been!

So, what's next? There are reasons to be constructive. Inflation-driven cycles differ from recent credit-driven recessions, producing notably milder impacts on corporate profits. Along with the likely resilience of labor and housing markets and the positive backdrop for productivity-enhancing capital spending, this creates ammunition for an argument that the worst may essentially be over. That's not a prediction, just a possibility.

I don't think the 1970s or 1980s analogies apply now, even though inflation is at a 41-year high. Note that profit vulnerability then was more modest than in credit-driven cycles. Ironsides Macroeconomics, an independent research firm, notes that in 1973-1974 when the Fed funds rate reached 11%, S&P 500 profits fell 15%, while in 1982-1983, when the Fed funds rate peaked at 20%, S&P 500 earnings fell less than 14%. In both cases, nominal prices helped cushion profits from declines in real volume. I think this time could be similar. Furthermore, the hit to S&P 500 profits could be even more modest, resembling the 1990-1991 recession, which the Gulf War partly catalyzed – and which had a similar resulting spike in oil prices.

Today, Fed Chief Jerome Powell continues to talk about the importance of getting inflation under control. And the Fed seems to be in no mood to veer from its inflation-fighting course, even if it means a recession.

But I don't believe we had negative growth in 2Q, so any recession would not be official until early 2023 at the soonest. Remember, when the negative Q1 growth number came out, much of it was attributed to trade imbalance effects. Those mostly reversed in Q2.

Furthermore, Moody's Analytics argues that plenty of stimulus cash remains in bank accounts, which could support consumer spending, and typical signs of rising loan delinquencies have yet to materialize (St. Louis Federal Reserve).

While higher interest rates will undoubtedly hurt demand for housing and autos, both sectors are sitting on a solid position vis-à-vis inventories and production rates. In the case of housing, new activity may be affected. However, the resilience of high housing prices—up by double-digit rates over the past two years—reflects extremely low supply that will only worsen with higher rates and a construction slowdown.

In autos, this cycle has yet to recover from COVID-related semiconductor shortages fully, and production remains below prior peaks. As supply chains clear, large order backlogs will keep manufacturing utilization uncharacteristically high for a recession.

As for the labor market, not only is it tight as defined by unemployment, but we are at an all-time high ratio of new job openings to potential applicants. This suggests that, rather than initially resorting to layoffs going into a slowdown, companies may first reduce their postings of unfilled openings. Next, while consumer savings have run down and credit card debt growth has picked up, payments relative to disposable income are not stressed.

We won't try to pinpoint a stock market bottom, and today's economic fundamentals have created stiff headwinds for equities.

We know market pullbacks and bear markets are inevitable, and we recognize they can create unwanted angst. We also know that an unexpected, favorable shift in the economic fundamentals could fuel a sharp rally since sentiment today is quite negative.

As we have seen from over 200 years of stock market history, bear markets inevitably run their course, and a new bull market begins.

We also saw stocks rally from the lows of the 1974 bear market.

We know times like these can be difficult. If you have questions or would like to talk, we are only an email or phone call away.

Should you consider a financial caregiver for your aging parents or yourself when the time comes?

Age and poor health can quickly impair a person's ability to deal with life's many issues, including money. There are many avenues you may decide to take for a loved one (or you may recognize that you desire some assistance yourself). Below we cover a variety of arrangements for help at various levels of need and formality.

Also, note that laws vary from state to state, but here we look at some general guidelines. As with any legal issue, please consider consulting with an attorney that specializes in such matters if and when you are making these decisions.

If you have an elderly relative who needs help yet is still highly functioning, one option is to appoint a conversation partner. This allows a trusted friend or relative to oversee someone's finances. They could receive duplicate bank and brokerage statements and join the elder person when they visit their financial advisor.

You could also consider appointing a trusted contact person that someone's advisor or bank can reach out to in the event of certain circumstances, such as suspected fraud.

Another option at this level is to establish a convenience account. This is not a joint account, but it lets an assistant help an individual deposit funds, withdraw money, and write checks. At the account owner's death, the helper will not receive the funds in the account. But there are pitfalls to these accounts, as we'll discuss below.

Joint tenants with rights of survivorship allow the survivor to take ownership of the account. This could quickly cause conflicts with heirs and thwart the wishes of the deceased.

Can you set up the account as tenants in common? That is a possible solution, as the assets then would pass to the deceased's estate and not the financial caregiver named on the joint account.

A power of attorney gives someone the legal authority to make decisions about an individual's finances and property.

Might an older or infirm person need a guardian? If a person doesn't have a power of attorney, a court can name a guardian or conservator to manage their finances and health care decisions if the court decides they cannot manage decisions alone.

A trustee is given authority only over assets in a trust, such as a revocable living trust. Like a will, the trust will stipulate who receives the assets in the trust when the owner dies.

You might find yourself in the role of court-appointed guardian over someone in your family. Such guardians, conservators, and trustees are considered fiduciaries. It's a high standard. It means the financial caregiver must manage a person's finances for their benefit. They promise to act on the other person's behalf and always must put that person's interests first.

If you fail to meet the high standards of a fiduciary, you could be removed, sued, forced to repay the money, or even have criminal charges brought against you.

Unfortunately, sometimes those appointed to care for the elderly will take advantage of them. Here are some signs to watch out for with the older people among your family and friends.

As you think through persons who might fit the role of financial caregiver, ask yourself or the person who is going to be assisted:  Am I comfortable sharing my wishes with them? Will they carry out my wishes? Do I trust this person? Will they act in my best interest? Will they manage my affairs correctly? Will they keep proper records and keep their money separate from mine?

Appointing a financial caregiver is not a responsibility that should be taken lightly. Choose the right person. If you answered "Maybe" or "No" to some of these questions, consider asking someone else. (Sources: Consumer Financial Protection Bureau, AARP)

If you have additional questions, we'd be happy to speak with you. That's what we're here for.

If you like this newsletter, I encourage you to pass it on to any contacts you have that might benefit.  It's easy. Just click on the web address (the URL) above, copy it (ctrl-C), and paste that (ctrl-V) into an email to your friend or family member.