Notes Along the Path: March 2022 Edition

Despite repeatedly denying he had any designs on his neighbor, Vladimir Putin launched an invasion of Ukraine late last month.

Conditions on the ground are quite fluid, and we won’t delve into military strategy.

What we can offer is a sobering perspective for those who are suffering in Ukraine. As I was flipping through the TV channels the other night, I was quite aware that what is happening in my home doesn’t compare to what’s happening in the homes of moms, dads, sons and daughters in Kyiv. I wouldn’t want to trade places with them. I’m sure you wouldn’t either.

From a financial perspective, investors had been bracing for a possible invasion for much of February. We saw it in increased market volatility and a drop in the major indexes, though the decline up to the invasion was generally modest.

Since peaking on January 3, the S&P 500 Index’s peak-to-trough decline has been 11.9% (through February 23), according to S&P 500 data supplied by the St. Louis Federal Reserve.

It’s the first official correction (defined as a decline of at least 10%) since the early days of the pandemic. However, not all of the sell-off can be blamed on the Russia-Ukraine crisis. Investors are also wrestling with higher inflation and talk of higher interest rates from the Federal Reserve. But the crisis at hand has driven sentiment in recent days.

Yet strong Q4 corporate profits, according to Refinitiv, and the growing economy have cushioned the downside. It has been a powerful tailwind for investors, but not enough to overcome stiff headwinds from geopolitical uncertainty and talk of higher interest rates.

Massing Russian troops along the border of Ukraine created uncertainty for investors. Analysts often say that markets despise uncertainty. We feel that the term “heightened uncertainty” may be a more accurate description, as there is always some uncertainty attached to investing.

When heightened uncertainty arises, it simply means that the number of potential outcomes for the economy is increasing. In most cases, those possible outcomes are usually negative, even if the odds of occurring are remote.

Over time, the new reality gets incorporated into the outlook and the focus returns to the domestic economy. That has been the historical pattern. In other words, historically selloffs tied to geopolitical uncertainty have been limited.

LPL Research has compiled the market reaction to 22 geopolitical “market shock events” since WWII. On average, the total drawdown was just 4.6% for the S&P 500 Index.

During the Cuban missile crisis, the S&P 500 lost 6.6% over eight days. At the time, the world appeared to be on the brink of nuclear annihilation.

The biggest decline in LPL’s survey occurred after the surprise attack on Pearl Harbor. The index shed nearly 20% in 143 days but managed to erase losses within one year of the attack.

I think today the reaction to an event like the Cuban missile crisis would be FAR greater, which indicates that more of today's investors are focused on the short-term.

Looking into a murky crystal ball

How the war affects the U.S. and global economy will ultimately have the biggest impact for investors. What will happen to oil prices? How might sanctions play out? Could we see cyberattacks or a wider war that involves NATO? Will the invasion rein in the Fed’s apparent impulse to boost interest rates at an aggressive pace?

These are difficult questions to answer.

At the same time, stiff sanctions against Russian banks and Russia’s Central Bank did not cause immediate tremors in U.S. markets.

From a financial perspective--and this is important--Russian oil and natural gas have not been sanctioned. Why not?  Because our European allies would certainly not go along with it and right now unity is critical.

In this case, a more hawkish-sounding Fed and Russia’s aggressive posture toward Ukraine provided the perfect pretext for short-term traders to take profits.

While we have been due for a market correction, attempting to time such a pullback is all but impossible. There are those who have been calling for a correction for over a year and found themselves watching the major stock market indexes rise to new heights.

Besides, if you want to time the market, you must be right twice to be successful—near the top and near the bottom. The smartest analysts haven’t figured out that equation. They never will.

Longer-term, the biggest influence over stocks is the U.S. economy, the Federal Reserve, and corporate profits, or what we call the economic fundamentals. How the invasion affects consumer psychology will play a big role.

Are people going to avoid dining out, or, for that matter, skip the purchase of an appliance or a planned trip? It seems unlikely.

The direct impact of Russia and Ukraine on the U.S. economy is quite limited. From December 15, 2021  to  February 17, 2022, just 4% of the of S&P 500 firms that conducted earnings calls with analysts (earnings calls typically follow the release of an earnings report), cited the word “Ukraine,” according to FactSet.

By contrast, 72% of S&P 500 companies cited “inflation” over the same period.

Indirect concerns will of course spring from oil prices and certain commodities Russia and Ukraine export.

Focus on what what you can control. What is happening overseas is something you and I cannot control.

Maintain a disciplined approach. Your financial plan helps manage emotions. It is the roadmap to your goals. It incorporates the unexpected potholes you will hit along the way toward your goals.

War can take ugly turns, and we are bracing for more volatility. Disappointments could send stocks lower, while positive surprises could boost equities.

In the 13 times the S&P 500 has dropped between 10% and 15% since 1980 (excluding the current correction), the average gain from the low after one year was 21.9%. The index rose in all but one of those instances after one year.

We realize that market volatility can be frustrating. But through diversification and various measures, we take steps to help manage risk. When corrections end, the historical trends are encouraging.

We understand that news from Ukraine is very unsettling. In the face of overwhelming odds, many of us have been heartened by incredible acts of patriotism, bravery, and defiance from ordinary Ukrainian citizens. Their heroics have inspired us all.

Let’s wrap this up with a broad historical perspective from UBS analyst Art Cashin. When Art began in the business over 60 years ago, a veteran trader told him, “The world only ends once. Don’t bet on the end of the world. The odds are way against you.” 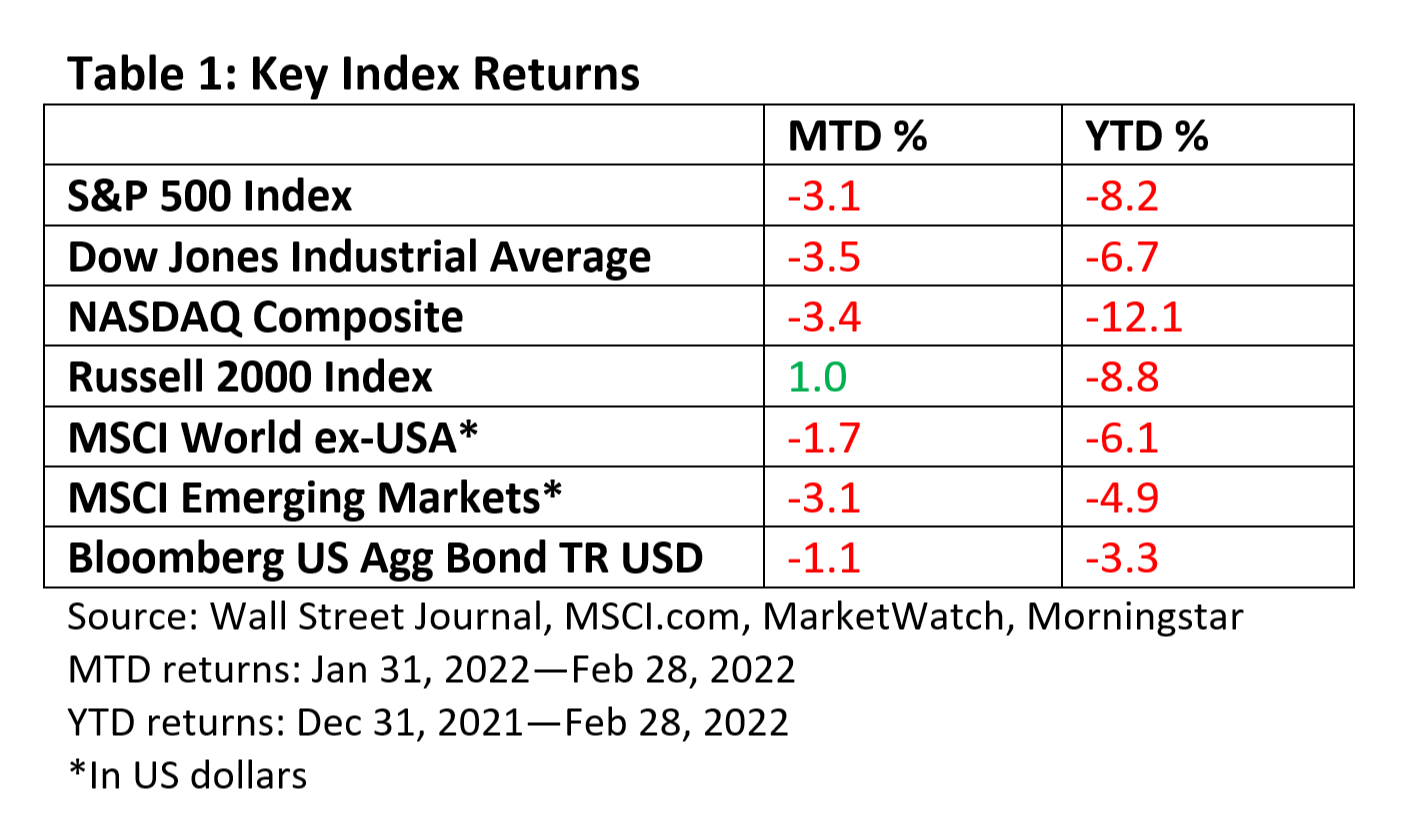 Most of us have watched movies or read books that depict a lawyer reading the will in front of the family. Script writers add to the drama by highlighting the reaction of those who receive and those who have been left out of the will.

Steps to take as you fulfill your duty as executor

Cash, bonds, or stocks may have little emotional appeal for the heirs. But the testator’s decision to convey his or her wishes prior to passing regarding treasured heirlooms may help avoid disagreements that can sometimes get out of hand.

If you like this newsletter, I encourage you to pass it on to any contacts you have that might benefit.  It's easy. Just click on the web address (the URL) above, copy it (ctrl-C), and paste that into an email to your friend or family member.