Notes Along the Path October 2020

Welcome!  I hope you may benefit from this month's edition of Notes Along the Path.

For those of you that are existing clients, I hope you will consider sharing this with someone you know who might be asking themselves some questions about their retirement.

Today we will be discussing:

·  Market commentary: the week in review followed by a look back at September
·  2020 Election Notes (investment impacts)
·  Six Questions to Ask Yourself About Retirement
Market Commentary, last week's numbers:
This week in perspective is provided by Briefing.com. Briefing.com offers live market analysis on their web site www.Briefing.com
The S&P 500 (+1.5%) and Dow Jones Industrial Average (+1.9%) snapped four-week losing streaks this week, and the Nasdaq Composite performed comparably with a 1.5% gain. The real winner, however, was the Russell 2000 with a 4.4% gain.
Ten of the 11 S&P 500 sectors finished in positive territory. The real estate (+4.9%), financials (+3.3%), utilities (+3.3%), and consumer discretionary (+2.5%) sectors outperformed. The energy sector (-2.9%) was the lone holdout, as sentiment was pressured by an 8% decline in crude prices ($37.05 per barrel, -3.17) amid growth/demand concerns.
Prior to Friday, the market had already established the week's gains, largely on technically-oriented trading activity in oversold stocks. Early in the week, cyclical stocks benefited from M&A activity, better-than-expected economic data (although less consequential reports), analyst upgrades, and stimulus optimism.
The mega-caps also participated in the rebound, with the market shaking off any residential weakness that followed the first presidential debate on Tuesday. Friday, however, is when the real news flowed in, and the mega-caps sold off to end the week.
September nonfarm payrolls increased by 661,000 (Briefing.com consensus 800,000), and there were indications that a fiscal relief bill could soon be reached. The latter remains a show-me story, but value/cyclical stocks did benefit from the hopeful-sounding reports.
Highlighting other key economic reports, weekly jobless claims remained elevated at 837,000 (Briefing.com consensus 850,000), personal income declined 2.7% m/m in August (Briefing.com consensus -2.0%), and the ISM Manufacturing Index for September decelerated to 55.4% (Briefing.com consensus 56.0%) from 56.0% in August.
US Treasuries (prices) finished lower on the longer-end of the curve. The 2-yr yield was flat at 0.13%, and the 10-yr yield increased four basis points to 0.70%. The US Dollar Index fell 0.9% to 93.84.

Market Commentary, the month that was: A September pothole
The S&P 500 Index surged an impressive 60% from the March 23 bottom to the most recent high in early September (St. Louis Fed S&P 500 data). But stocks hit a roadblock in September. 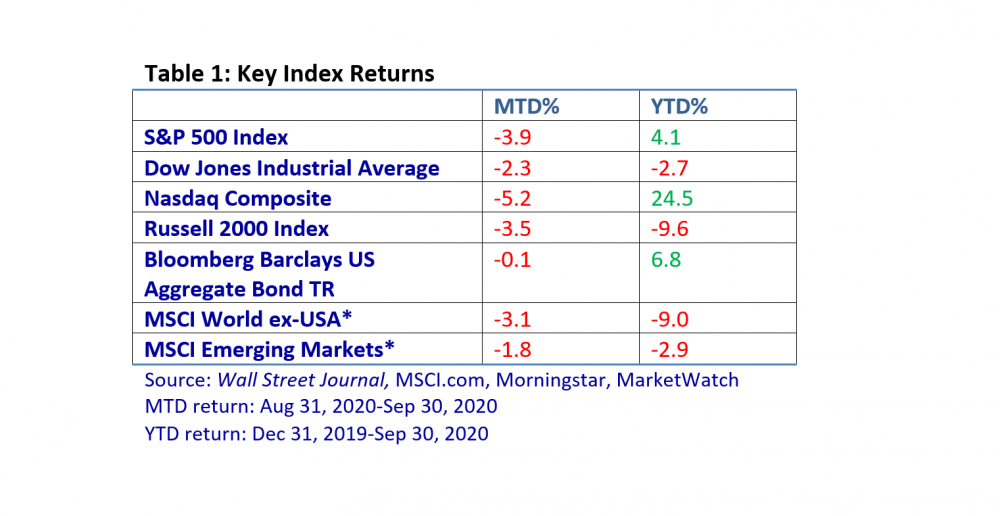