Notes Along the Path October 2021 Edition

Here at Your Best Path, we do not sell fear.  I get help composing these monthly newsletters in the form of a suggested topic and data around that topic each month.  This month the suggestion was to discuss, "Will you be paying more in taxes next year?" Now that's always a good question to ask, but until something is passed into law, I don't see the point of getting too worked up.  So first, I'll cover the markets, and I'll get into the possibility of future tax law changes after.

What is it about September?

September has historically been the worst month for stocks, according to St. Louis Federal Reserve data measuring monthly S&P 500 performance over the last 50 years. If you wonder whether the trend has waned in recent years, the answer is no; it hasn't. Over the last 10 years, September's performance has been substandard.

While analysts have offered various explanations, no one has pinpointed why we sometimes see seasonal weakness as summer concludes.  My admittedly DC-centric opinion: in election years, there is tremendous uncertainty about the outcome, and in non-election years this is the time when major legislation is unveiled, but there is no consensus about its prospects for passage.

Looking at the table of Key Index Returns, we see that the S&P 500 Index fell 4.8% in September. It was the first monthly decline since January and the worst decline since March 2020, when the lockdowns began. 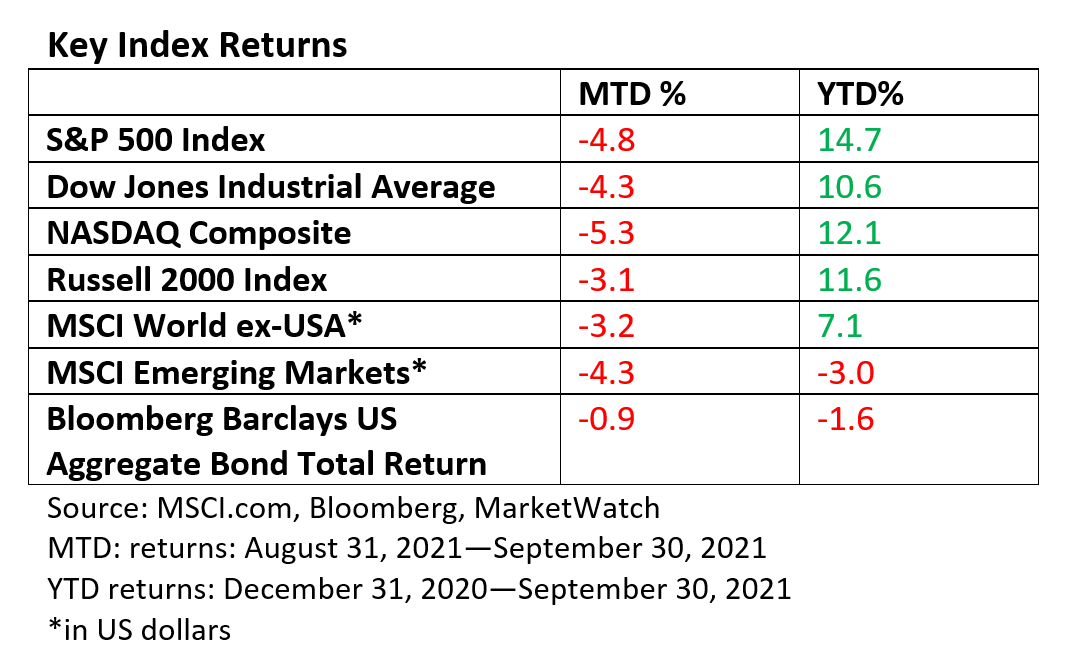 Peaking at a new record on September 2, the broad-based S&P 500 Index began a pullback that can be tied to several factors.

Before we continue, a 4.8% drop is modest by market standards. We've yet to shed 10% since the bull market began in late March 2020, which would be considered a "correction" by analysts.

So, what's behind the sell-off last month?

The economy is not contracting, and moderation was expected after Q2's 6.7% annualized growth rate (US BEA), but the slowdown has been more pronounced than expected.

The Atlanta Fed's GDPNow model, which incorporates economic data that impacts GDP, suggests that Q3 growth is tracking at just 2.3%. This would include Q3 data released through October 1. That means July, most of August, and none of September's data have been inputted into the model.

While profit growth has soared coming out of the lockdowns, per Refinitiv (an American-British global provider of financial market data), a more pronounced moderation in profit growth may be on tap.

Next question, why is Q3 disappointing on the economic front? Well, the spike in Covid cases is causing some hesitation in industries that are dependent on face-to-face transactions. But there is good news on this front. The CDC says cases have slowed recently. We'll see how this continues to play out later in the fall. While bank deposit data from the St. Louis Federal Reserve suggest consumers have plenty of spendable cash in reserve, the influx of new stimulus money has dwindled, and spending has slowed. We also see stubbornly high inflation in the automotive sector, which accounts for most of the current inflation pressure, as supply chain bottlenecks aren't fixing themselves.

As Fed Chief Jerome Powell noted at the end of September, bottlenecks and shortages of critical raw materials are "not getting better—in fact, at the margins (they are) apparently getting a little bit worse."

An uptick in bond yields near the end of the month also dampened sentiment. While yields remain quite low, they ticked higher after the Federal Reserve took on a slightly more hawkish tone at the September 22 meeting.

These are probably the biggest reasons for the pullback last month.

Not to be Debbie Downer, but let's look at a few more.

The debate over the debt ceiling took a toll. As Moody's Analytics correctly noted, "The debt ceiling will be raised. Not doing so would be catastrophic for the economy, so this is an extremely low probability event." We've seen this drama play out before, and lawmakers avoided sailing into uncharted waters. Still, it caused some headline anxiety.

China's largest and most indebted property developer is on the brink of bankruptcy. While Western financial exposure is likely limited, a disorderly default could create significant problems for the world's second-largest economy.

Finally, an energy crisis is brewing in Europe, while natural gas prices hit new highs in Asia. They are running about six times what we see at home (Reuters). The US isn't directly affected, but these are costs that may get added to manufactured goods or could restrict output, adding to supply chain woes.

We're overdue for at least a 10% correction. We know corrections tend to be unpleasant, but they are part of the investment landscape.

With all but the most aggressive and risk-tolerant investors, we recommend a healthy portion of fixed-income investments or other hedges. We don't see the extreme highs when stocks are rising but mixing in fixed income reduces your risk on the downside when equities turn lower.

I don't expect to see big moves either up or down for a while, but any number of things could spook the markets and cause a correction. So pay attention to your investment time horizon (how long before you will need the money.  As I said in my weekly message a few days ago (stalemate-in-the-capitol) If you have money that will be needed in the next year or two, please protect yourself and move it to money market funds or a stable value fund if it's not there already.

As we've noted in the past, stocks tend to take the stairs up and the elevator down. If we are headed toward an overdue correction, remember that pullbacks tend to be short-lived.

Here are the basics.  If you want to know more, please let me know.

Left on the cutting room floor

Lawmakers in the House have not proposed taxing unrealized capital gains at death, as had initially been proposed by the President. Also, the step-up in basis for inherited assets is NOT in the current House proposal.

But one proposal being floated is to reduce the estate and gift tax exemption to $5 million. Tax reform in 2017 raised the limit to $11.7 million for individuals and $23.4 million for couples. If that happens, you will have plenty of time to respond.  Since most of us can't choose when they die, worrying about these particular changes before they happen is counter-productive.

It's normal to ask, "How will this affect me?" Or, "Will I be ensnared by Congress' definition of wealthy?" If proposed changes in the tax code that passed a House committee are enacted into law, those that are wealthy, as defined by lawmakers, will likely see their taxes rise.

So if you are in the top tax bracket already and can make some adjustments, it's probably a good idea to take action– after the law is passed.

New limits on QBI deduction. If you are self-employed, the House proposal limits the deduction to $500,000 for joint returns and $400,000 for individual returns.  Once you have exceeded the cap, additional amounts will be disregarded.

These are some of the major provisions. They may or may not be enacted into law.

I would be happy to entertain any questions and tailor our recommendations to your needs. As always, consult with your tax advisor regarding any tax-related questions.

We understand that taxes play a role in overall returns, but so do many variables. Your financial plan should ultimately drive investment decisions, not tax laws. Don't let the tail wag the dog. In other words, be careful not to let taxes solely dictate your investment decisions.

[[https://www.schwab.com/resource-center/insights/content/will-taxes-rise-wealthy-what-you-should-know Will Taxes Rise for the Wealthy?]]

I trust you've found this review to be educational and informative.

If you have any questions or would like to discuss any matters, please feel free to give me a call.

If you like it this newsletter I encourage you to pass it on to any contacts you have that might benefit.  It's easy. Just click on the web address (the URL) above, copy it (ctrl-C), and paste that into an email to your friend or family member.